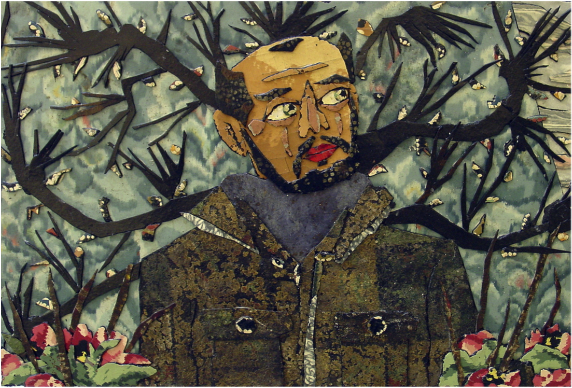 Bill Miller is a collage artist who has been using vintage linoleum flooring as his medium for almost 20 years, and currently lives in Pittsburgh PA.  Linoleum was the ultimate interior medium, present in all aspects of 20th century life from Grandma’s kitchen to the corner drug store and neighborhood school. Miller’s innovative work is recognized for pictorial assemblages that rely only on the flooring’s found surface, with no added paint, to render his subjects. Miller’s images range from bucolic landscapes to surrealistic, fiercely political pieces that draw on iconic news and pop culture images that have informed society’s common memory. His unexpected use of familiar patterns taps into the medium's nostalgic qualities, imparting a sense of personal history and rediscovery within each piece.
Born 1962 in Cleveland, OH, Miller originally concentrated on painting and printmaking. He relocated to Pittsburgh where he was a founding member of the Industrial Arts Co-op, which sought a collective artistic response to the devastating impact of decaying industrial infrastructure on surrounding communities. Together they constructed immense sculptures inside abandoned industrial buildings from materials found on-site. While scavenging, Miller was drawn to scraps of vintage linoleum, and compulsively began collecting what was to become his new pallet and principle medium for almost 20 years.

Miller’s work has long been shaped by the tragic impact of industrialization. Both his parents were from West Virginia coal mining families. His grandfather was killed in the mines when Miller was a child. His parents raised Bill and his sister in the industrial center of Cleveland OH, where his father too lost his life in an auto factory when Miller was a teen. Miller moved to Pittsburgh as a young adult just as the steel industry collapsed, decimating long time communities and creating a rust belt of crumbling towns and massive structures.

Miller moved to the NYC area in 1998, working at The Village Voice and showing his work in a series of one-man exhibits in the Chelsea neighborhood of Manhattan. In 2000, he relocated to the Washington DC area to focus full time on his art.

Miller was honored with a retrospective exhibit at the Pittsburgh Center for the Arts in 2007. In 2010, he was chosen to create the cover image for the Frank Zappa CD Congress Shall Make No Law, issued to mark the 25th anniversary of Zappa’s anti-censorship testimony on Capitol Hill to support artistic freedom of expression.

In 2012 Miller was chosen to create the artwork for the 13th annual Woodstock Film Festival, joining notable artists Peter Max, Milton Glaser and Bill Plimpton who were previously selected for this honor. Miller’s work will be displayed in Barcelona during Drap Art, a juried international exhibition of recycled art.